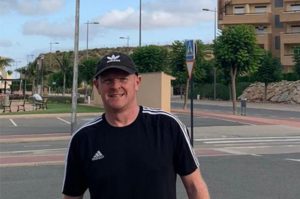 Back on New Years Day 2021, Ian Bold, Sales Director for Aqueous, decided to blow off the cobwebs and go for a run as part of a new year’s resolution to keep fit.

What started out as a one-off 10k run, rapidly turned into 10, 20, then 30 runs in a row and a commitment to keep it going for a whole 6-months to raise money for the charities, Prevent Breast Cancer and Speed of Sight.

But, once the 6 months of daily runs were completed and he had raised £2000, he was encouraged by the rest of the team at Aqueous to keep going for the rest of the year to see if he could raise even more money.

When Ian reached his 6-month milestone back in the summer he said: “People were almost making out I was doing something inspiring, and I genuinely didn’t think I was. I’m just a bloke who is relatively fit and healthy going out for a day’s run which then grew arms and legs.

“It just gave me a bit more focus to say I’m doing it for these charities, let’s carry on. Both charities are ones that we support anyway through the business. The response has been quite humbling.”

Ian has not once missed a day where he has run 10k all year, even if that meant running at 2am or 6am to ensure he could make work meetings or social events. He’s lost count of the number of different towns and countries he’s run 10k in, but they include, England, Scotland, Wales, Italy, France and Spain. He’s also worn out 7 pairs or trainers too!!!

You can listen to Ian being interviewed on BBC Radio about his fundraising activity here: https://www.podbean.com/ew/pb-tut7v-116252d

The whole team at Aqueous are immensely proud of Ian’s achievements, as he draws closer to his final run on New Years Eve 2021.
Ian is hoping to raise over £3000, but he’s not quite there yet, so please donate as much as you can to spur him on in his final run of the year, where he will have completed a staggering 3650Km.