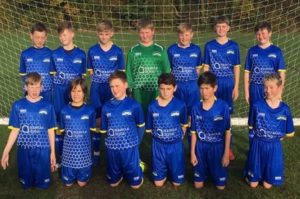 The top Warrington junior team are proudly carrying Aqueous Digital’s logo emblazoned on the front of their new blue and white kits.

Emma Guy, Aqueous Digital’s Director of Sales Operations said: “We are really pleased to be able to sponsor Woolston Rovers Royals Under 12s. As a local business we place great importance on supporting wellbeing and mental health initiatives within the workplace and wider community.

It’s vital to encourage young people to get fresh air and exercise, which is why this deal is such a great fit for us.”

Zac, striker for the team said: “I’ve always loved playing for Woolston Rovers Royals and having the Aqueous Digital logo on the kit just makes the buzz even better.”

This season, the team are aspiring to get promoted from the first division into the premiere league of the WJFL.

The team have already made a fantastic start to the season, winning six matches, which has rocketed them into third place on the table.

All the staff at Aqueous are big football fans and are cheering on Woolston Royals in the hope they finish the season on top.